There's no such thing as you and I, it is us.

A WONDERFUL REPUBLIC HAPPINESS IN ANTALYA 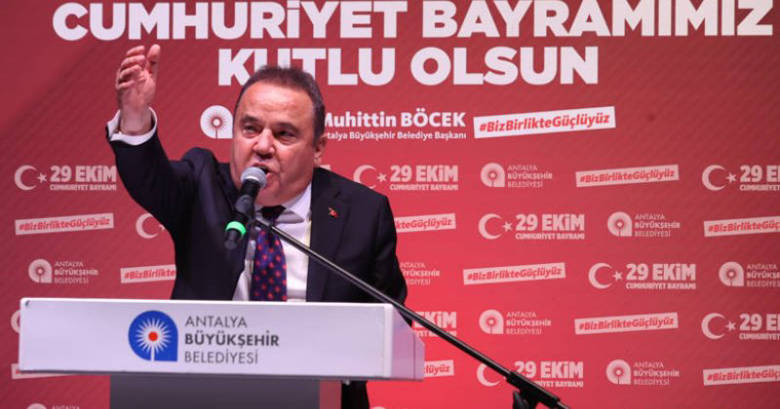 Antalya residents celebrated the 99th anniversary of the establishment of the Republic of Turkey on October 29th with great enthusiasm. The Antalya Metropolitan Municipality organized a torchlight procession and a Sefo concert, which drew tens of thousands of Antalya residents.

Antalya residents celebrated the 99th anniversary of the establishment of the Republic of Turkey on October 29th with great enthusiasm. The Antalya Metropolitan Municipality organized a torchlight procession and a Sefo concert, which drew tens of thousands of Antalya residents. Citizens of Antalya who filled the Republic Square experienced the enthusiasm of the Republic Day celebrations. Addressing the enthusiastic crowd, Metropolitan Municipality Mayor Muhittin Böcek said, “I promise that in the second century of our Republic, too, without leaving the footsteps of Atatürk, in the light of science, art and culture, we will walk without stopping, without hesitation, for a country where peace, brotherhood, freedom and democracy prevail.”

Antalya is Illuminated with by a Torchlight Procession

The Antalya Metropolitan Municipality Band and Orchestra played marches to accompany the torchlight procession, which began at 19:00 from Konyaalt Varyant. Mayor of the Antalya Metropolitan Municipality Muhittin Böcek, Republican People's Party (CHP) Antalya Provincial Chairman Nuri Cengiz, IYI Party Antalya Provincial Chairman Mehmet Başaran, Mayor of Muratpaşa Ümit Uysal, CHP Deputy of Antalya Cavit Arı, Rafet Zeybek, council members, NGO representatives and tens of thousands of others joined. With torches and Turkish flags in their hands, citizens who took part in the Torchlight Procession created a magnificent scene. At the Torchlight Procession, streets of Antalya turned into colors red and white. Citizens of Antalya attended the celebration of Republic Day by watching the torchlight procession from the balconies of their homes.The Antalya residents who were waiting in the square contributed greatly to the excitement as the torchlight procession approached Republic Square. The entire Republic Square was packed to the brim.

Speaking after the moment of silence and the singing of the National Anthem, spokesperson of the Hand in Hand for the Republic Platform İbrahim Daş said that the people of Antalya held a Republic Day celebration worthy of their name. Later on, Antalya Metropolitan Mayor Muhittin Böcek entered the platform while holding the Turkish Flag and greeted the large crowd that had gathered in Republic Square. Mayor Muhittin Böcek started his speech by saying "Happy Republic Day" and remarked, "Gazi Mustafa Kemal Atatürk, who gave his entire life to this nation and the Republic, brought about several revolutions throughout his life, but his greatest revolution was the Republic. I strongly believe, our Republic, which is the symbol and greatest assurance of our freedom and independence, will be carried much further on the shoulders of our youth, the guarantee of our future.”

The 2nd Century of Our Republic Begins

The second century of the Turkish Republic is beginning, Mayor Böcek declared, "As Atatürk stated; O rising new generation, we established the Republic, and you are the one who will glorify it and preserve it. I promise that in the second century of our Republic, we will continue to follow in the footsteps of Atatürk, as we have for the past 99 years, in our quest for a nation where peace, brotherhood, freedom, and democracy flourish in the light of science, art, and culture. Do you also promise? Live long and prosper, Mustafa Kemal's army! Throughout my life and in my 28 years of political life, I have carried out all my work in line with Atatürk's revolution and principles.

"O great Atatürk, I swear that I will follow the route you created and reach the destination you established without stopping. How happy is the one who says I am a Türk! In the 100th anniversary of our Republic, we hope to meet in a more democratic and brighter Türkiye, where festivals and concerts are not prohibited and where people can express themselves more freely, stay with love, remain with the Republic, stay with Atatürk. Long live the Republic,” he said.

Residents of Antalya met with Sefo

After the speech of Antalya Metropolitan Municipality Mayor Muhittin Böcek, the famous rap artist Sefo took the stage. The tens of thousands who filled the venue experienced magnificent enthusiasm when Sefo appeared on stage. Antalya citizens were treated to an outstanding concert by Sefo. With his songs, Sefo gave the Antalya audience an outstanding performance. The citizens of Antalya thoroughly enjoyed the 29th of October Republic Day, dancing to the well-known songs of Sefo. Mayor Muhittin Böcek presented Sefo with a portrait of Atatürk in memory of the day. Sefo also expressed his gratitude to Muhittin Böcek, the Mayor of the Antalya Metropolitan Municipality, for bringing them together with his Antalya fans. The 99th anniversary of the Republic was enthusiastically celebrated by tens of thousands of people in Republic Square.

Have you tried our mobile app?